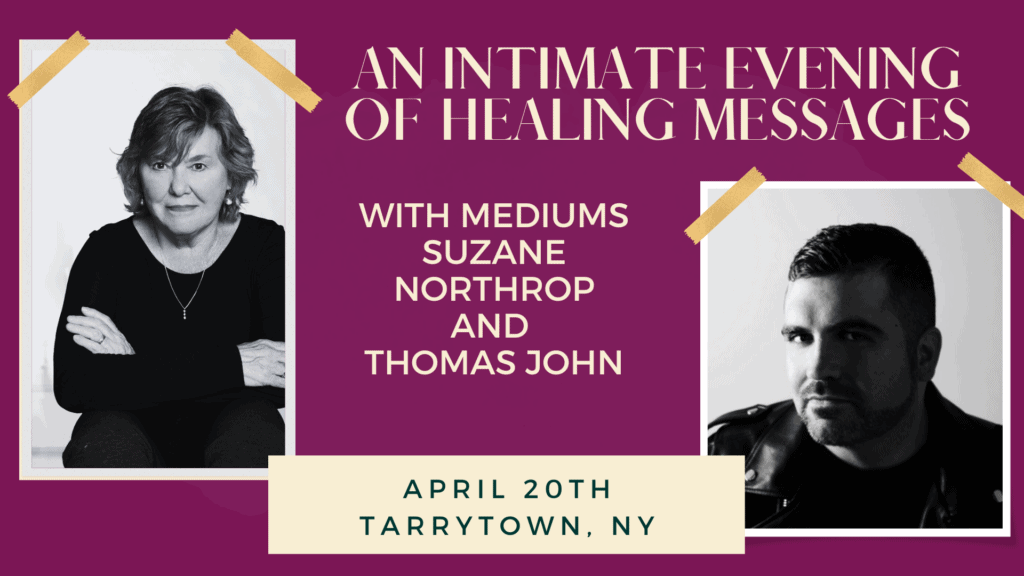 Suzane and Thomas are coming back to Tarrytownfor an intimate evening with LIMITED SEATING for this 2 1/2 hour in-person event on Thursday, April 20th, 2023!

We are limited to ONLY 100 general admission seats, so grab yours soon!

There will also be a book signing by Thomas and Suzane.

Thomas John is a global psychic sensation who has impressed audiences with his accurate messages from the Other Side & is constantly in high demand with influencers and those at crossroads in their life.  Thomas has also been a trusted advisor to celebrities around the country, including Courteney Cox, Sara Gilbert and Goldie Hawn. Thomas also aired his first television show: Seatbelt Psychic on Lifetime (2018) & his first novel, Never Argue with a Dead Person: True and Unbelievable Stories from the Other Side, was published in 2015. In recent years, his infallible track record and down-to-earth approach has lead him to being known as one of the world’s top psychics.

For over 30 years, Suzane Northrop–an internationally acclaimed medium, grief & bereavement expert, TV and radio host, and author of three books to date–has helped thousands of people worldwide to recover and heal from the loss of loved ones. Suzane does so by bridging the gap between the world of the living and the world of Spirit.

Everything Happens for a Reason (now published in four languages), and Second Chance: Healing Messages from the Afterlife, Suzane has also broken new ground with, A Medium’s Cookbook: Recipes for the Soul. In this, her latest book, Suzane shares tips and tools for tapping into your own power to connect with departed loved ones.

The Suzane Northrop Radio Show continues to reach new and amazed audiences every month on the Blog Talk Radio Network. In the HBO special, Life Afterlife, Suzane and other mediums were tested by Dr. Gary Schwartz, and it was Suzane who scored the highest accuracy rate. The Emmy-nominated TV series, The Afterlife, has captured the imagination and hearts of millions in both the U.S. and Canada by demonstrating Suzane’s superior talent as a Medium. She has worked with organizations such as The Afterlife Awareness Conference, COPE (Connecting Our Paths Eternally), The American Foundation For Suicide, and Helping Parents Heal. Suzane is also on faculty at The Omega Institute for Holistic Studies, and has collaborated with practitioners from Pacific Pearl of La Jolla.  She has made, and continues to make, a profound impact on those who experience her work.

In addition to developing and running hundreds of workshops and seminars, Suzane continues to provide private and group readings for those who want more intimate settings.

Currently, Suzane continues to lecture and consult, writes and publishes a free monthly newsletter and hosts her own radio show with notable guests each month. Suzane is working on her new book, and developing television projects and podcasts.

*** Purchase of this event does NOT guarantee that you will receive a message during the reading.

No refunds/All sales are final