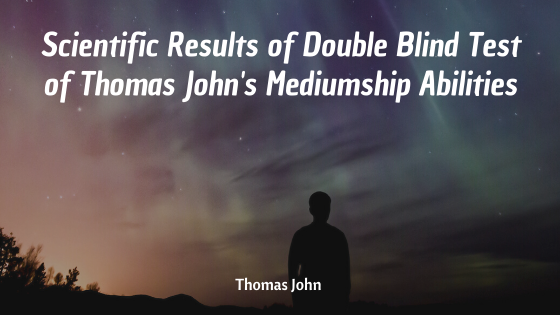 Statement posted with permission of Dr. Gary Schwartz.
_
I wanted to share with you the results of an exciting experiment I was recently a part of.
As you know, there are many skeptics to the work I do, and I am constantly faced with criticism for the work that I do. I have no problem with that, as I understand the need for people to really understand the work I do. In fact, I think it’s kind of cool that there are skeptics—they need to have a voice, too.
The only way to really take on skeptics is to approach them with hard science. That’s why, when Dr. Gary Schwartz reached out to me to test my mediumistic abilities, I jumped at the chance. Schwartz is a PhD psychologist who was trained at Harvard University, and has tested the veracity of mediums for over 20 years. He knows the scientific way to test mediums, and I thought this would be a great opportunity.
We did two test readings, and after he scored the readings, he released the following statement about me:

“I evaluated the purported mediumistic abilities of Thomas John in 2019 during two different double blind sessions. The subjects – both senior PhD senior scientists – who wished to hear from their ‘departed’ wives, were not told who the medium would be. And Thomas was not told, and had no way of discovering, who the subjects would be. Only I, the researcher, knew these details.

The readings were done via Zoom with the subject and medium literally being across the U.S. from each other. For the second subject, the video was not on; hence, Thomas could not see the subject.

Despite all these controls, Thomas’s results were among the best I’ve observed in over 20 years of experiments with evidential mediums. He provided many specific details that were highly meaningful for the subject and rated very highly in a post-reading assessment. Further, his readings were rated as significantly more accurate by the subject versus a non-subject of similar age and life situation, that is, had a wife who recently passed on.

As a scientist, I follow the data. In this case, the data strongly indicate that Thomas John did indeed — at least in these two cases — communicate quite accurately with ‘deceased’ loved ones of these two subjects. Given the design of my evaluations, there are no other reasonable explanations for the findings (including fraud and cold reading).

I was willing to evaluate Thomas, in part, because of my deep interest in protecting people — whether living on earth or elsewhere — from unsubstantiated negative claims. The title of my upcoming book, ‘Extraordinary Claims Require Extraordinary Evidence: The Science and Ethics of Truth Seeking and Truth Abuse’, is based on a statement by the esteemed astrophysicist and professor Carl Sagan, PhD. Unfortunately, we live in a time when people are attacked with little or no basis. Based on the results of my evaluations, it is quite possible that Thomas has been the victim of such unfounded attacks.”